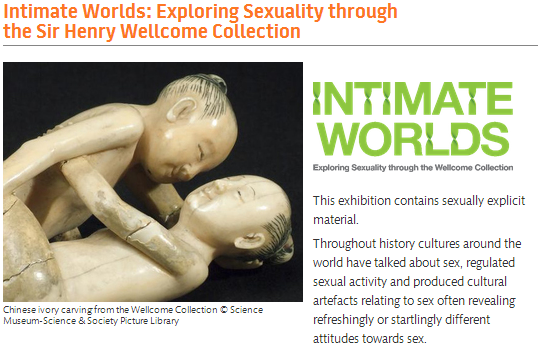 Warning- big fat swear coming up at the end.

When I was a young, idealistic archaeologist in training (i.e. when I was doing my MA), I was obsessed with sex. Well, who wouldn't be, at 21, filled with all the hormones of youth, right? Except the sex I was interested in was sex that had taken place thousands of years ago. It was sex that, unlike the kind that you could actually have, was not being scrutinised in glossy magazines or talked about by everyone having or not having it. It was a kind of sex that had been forgotten, fleeting yet important moments from lives long lived and over, that archaeologists preferred to pretend hadn't happened and go back to more important things like, you know, trade and politics and arguing over theories of "Romanisation." To be fair, there were some scholars who were working on this material- people like Barb Voss, Marilyn Skinner and others- but I wanted more.

ANYWAY, last weekend I had an opportunity to get back into ancient sex. And it was brilliant. You might have seen or read some of the press surrounding the Sex and History project at the University of Exeter- it's pure genius. I wish I'd thought of it myself. By using objects connected with sex, a team of three brilliant scholars are bringing archaeology into the classroom for sex education, encouraging young people to talk about the objects, then moving on to expectations and wider ideas surrounding sex in our own society. It's a fantastic illustration of just how bloody relevant things from the past can be to some of the deepest issues modern young people are grappling with. If this fab programme wasn't enough, there's also an exhibition at the Royal Albert Memorial Museum in Exeter, bringing together ethnographic and archaeological material to create a thought provoking gallery filled with interesting, intimate things, often so meaningful they take your breath away. Small but perfectly formed, a group of us were guided around the exhibition by Tony Eccles, the curator, who told us of the struggle to get the objects on show, and the unique nature of many of them. My favourite was a small votive vulva- a carved vagina left at a Roman temple, either in thankfulness or in hope, part of a tradition of leaving representations of afflicted body parts for the gods to sort out. Whoever made it may have suffered from a variety of different problems- but the desperation and discomfort they went through was wound up in this emotional little carving. I hope they got the cure they were looking for.

Prior to the gallery tour, we had two great talks from members of the Sex and History project. Dr Jen Groves (who I think just completed the coolest PhD ever- major thesis envy going on here) told of the wonder of entering the Wellcome collection's stores, and seeing the vast scale of the collection of erotic material. The deliberate decision to collect and curate this material by Wellcome was obvious in the diaries and letters she presented from her archival research- his requests to missionaries for anything "phallic" made me grin. Then Dr Rebecca Langlands spoke about Roman sexuality- electrifying the room with her discussion of the disquieting mixture of aggression, violence, playfulness and pleasure that infuses so many Roman texts dealing with sex. She ended with what I think may be my new favourite Martial epigram:

"Rumour tells, Chiona, that you are a virgin,
That there's nothing purer than your cunt.
Nevertheless, you don't bathe with the right part covered,
If you have the decency, move your knickers to your face."

You really can't beat that for a sign off. But seriously, if you're in Exeter, you should go down to the RAMM and see this great free exhibition. And start thinking about sex- as archaeologists, we're still far too reticent about something that was happening every day, involving thousands of people in the past.


There's been a kerfuffle over the last few days over whether or not the showing of certain body parts on a certain social media image sharing app is appropriate. Sparked by a pop star closing her account after topless images she'd posted were removed, Instagram's founders have been robust in their responses- they are not going to show (female) nipples, and that's that. Cue growls and grumbles (I don't think it's big enough to be outrage) on one side about the censorship of the female body- running along the lines that male topless images are fine, and sexualised images not showing nipples are fine- but an "empowering" self-portrait is not? Other observers have smugly agreed with Instagram, employing the good old "won't somebody think of the children" strategy, arguing that the internet is too sexualised as it is, and that younger users should not be exposed to nipples, among other things.

This argument popped up at a time when I've been thinking a lot about the power of images, particularly images of human bodies. While that's a theme I've worked on for a long time, it still absolutely fascinates me how we access, control, shape and distribute images of bodies, and what we use those images for. They can be admired, idealised, fantastic visions to one person, and degrading, humiliating filth to another- with hundreds of different viewpoints on the same image between those two extremes. Nudity in particular has been a cause of trouble for millennia- when is it acceptable to show a naked male or female body, and what are the socially appropriate responses to that image?

Rome forms a fascinating case study for these issues, and (in developing a new research project), it's a period I've been thinking about more and more. Public nudity amongst members of the same sex, within the curatorial context of bathing, was more or less acceptable (there is some concern about the exposure of mature male bodies to young men), but the display of images of the naked body during the Republican period remained a social taboo. Yet as Rome became increasingly influenced by Greece, where athletic, heroic nudity was a central part of representative practice, a problem arose that mirrors the current Instagram issue, although the issue was not sexualisation per se, but rather a lack of dignity in the naked person. The question remains the same, however- which is more important, public morality or fashion?

Steadily, high profile Roman images of the body began to adopt the nudity of Greek style- coyly, by the use of the muscle cuirass, a moulded piece of armour designed to give the impression of nude perfection while keeping the underlying body hidden (handy for man boobs) or more boldly, with nude or partially nude statues produced and purchased by the elite. Women's nudity, however, caused more problems. While across pre-Roman Italy, images of nursing mothers had been entirely acceptable, and Greek inspired visions of a nude Venus were happily adopted, the two traditions could not merge into one coherent representative style- Greek taboos on the depiction of breast feeding were too strong, as Larissa Bonfante notes. As a result, while images of bare-breasted idealised motherhood remained popular, as on the Ara Pacis monument, representations of suckling fell out of favour in officially sanctioned contexts. That’s reminiscent of another social media row over representation- whether breastfeeding breaks Facebook’s rules on the sharing of appropriate images.

This has been a speedy, oversimplified post, skimming over a lot of far more complicated issues past and present. But the Instagram nipple spat brings up deeper questions about the way we show our bodies to the world- what is and isn’t acceptable to arbiters of social morality and to each other, and how those standards are not set, but fluid and continuously changing. Looking at the change in representation of the nude Roman body, I can’t help but wonder if we’ll be looking back and asking what all the fuss was about over a topless selfie.
Posted by Unknown at Wednesday, June 04, 2014 No comments: