If you are reading this blog and you know me, follow me on Twitter, have seen me talk at a conference or spotted any of my "online presence" (ahem), you will know that my research is focused on the Etruscans. I say my research is focused on the Etruscans, but it quite often feels that much of my life is focused on these people, who I think about, read about, write about and dream about at least daily. The dreaming is particularly unnerving- these past people have made their way so deep into my subconscious that they come streaming out at me in my sleep. It is therefore inevitable that a huge portion of this blog will end up being Etruscan related- objects, sites, interpretations of other scholars, my own thoughts. Indeed, this blog itself wouldn't exist at all without my Etruscan obsession.

Here are some bones I spotted in an Etruscan tomb (don't worry, they are actually the remains of an unfortunate sheep) from a site I visited at the weekend with some friends/colleagues/fellow Etruscophiles (more on both the site and the fellows another day).


So, this week, I wanted to blog a bit of an introduction to the posts which will be building and growing over the coming months about Etruscan things. A lovely lady on Twitter yesterday asked me "Why Etruscans?" The short (and incredibly biased and unprofessional) answer to this is BECAUSE THEY WERE AMAZING. The long answer demands some facts and some context for this personal obsession. There are lots of Etruscan websites online (I will review these another day- some are hilarious, some are rage inducing) and even more myths about Etruscans which seem to have been absorbed into the modern psyche through ancient texts and misconceptions (this will also be the subject of a more detailed post). It's almost impossible to state any basic "fact" about the Etruscans without prompting a huge argument, and I think that this, more than anything, is one of the things I love about studying them. It is also one of the things that makes this study incredibly hard.

So, rolling up my sleeves, clearing my throat, who were the Etruscans?

The Etruscans lived in central Italy, between the rivers Tiber and Arno- an area equivalent to modern Tuscany, Umbria and northern Lazio. However, their area of influence spread as far north as Venice and as far south as Naples. The origins of the Etruscans are often described as mysterious, but it is now more or less commonly accepted that their civilization developed from indigenous Italian cultures of the Late Bronze and Early Iron Age. There are certainly settlements on sites which later developed into Etruscan cities (such as Tarquinia, Vulci, Veii and Cerveteri) from the 10th century BC, and the style of metalwork and ceramics from this period, termed the Villanovan after a famous early site,  is certainly an important influence on later Etruscan objects. I will not go into the alternative origins of the Etruscans in this post- suffice to say that there is a suggestion of emigration from the Near East into Italy in the 8th century BC.

This suggestion of people moving into Italy from Lydia (modern Turkey) is associated with the appearance of Eastern-style pottery, jewellery and iconography, found in incredibly rich elite burials. There are objects in these tombs from all over Europe and North Africa- amber, ivory, ostrich eggs, pottery from Greece and Egyptian scarabs. Rather than thinking in terms of migration, I prefer to think of this period as one in which Etruscans accessed the Mediterranean marketplace fully for the first time, taking up a postion as traders and merchants (or pirates if you're Greek) which would continue for centuries. It is likely that ingots and ore from the rich iron reserves of central Italy and the expert bronze workings of Etruria were the objects being traded for these Eastern objects. This pattern of trade and expansion continues into what is termed the Archaic period of Etruscan history, beginning in around 650 BC. At this point, rock cut tombs for a far higher proportion of the population provide evidence for increased availability of imported and previously elite goods, and this time is one of expansion in Etruscan settlements. Temples and sanctuaries decorated with exquisite terracotta detailing were built, and burials were furnished in places with sculptures and paintings (like this one from the Tomb of the Funeral Bed, Tarquinia).

This was all a little too good to last- by the later half of the 5th century BC there seems to have been a crisis in Etruria, with cities declining, perhaps as a result of trade restrictions, natural disasters or warfare. While Etruscan culture would recover into a flourishing Hellenistic incarnation, society and material culture were permanently changed. The sack of Veii by Rome in 396 BC marked the beginning of a period of increased conflict between Etruscans and Romans, and by 283 BC the Romans had dominated what was once the heartland of the Etruscans, whose culture became enshrined in Roman legend. Supposedly by the 1st century BC Etruscan religion was a source of great interest in Rome, and the famous "Ides of March" prophecy to Julius Caesar was made by a person of Etruscan descent.

That's a whistlestop tour of Etruscan archaeology. There are (well, there probably are) a million tiny pieces in this summary that you could pick up and run with. Every sentence I've written hides a fascinating series of objects, tales, lives and experiences. These are what will make up most of the "Bones" posts on this blog, filling in the gaps left wide open in this initial statement.

In answer to "Why Etruscans?" I'd like to post a photo of an object that made me grin like a loon when I spotted it in the Museo Nazionale Etrusco di Villa Giulia in Rome this morning. How can you not love a culture who made this grotesque little decoration on a pot?

Do/did you have any preconceived ideas about the Etruscans?

Have you seen any of the other Etruscan content online?

Have you been to the Villa Giulia Museum?

What culture/period/person from the past most interests you? 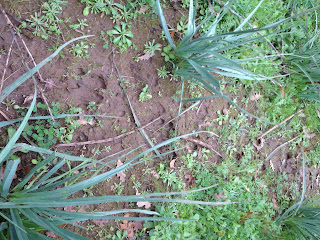 PS- Further to last week's post on looking down... here are some feet whose owners hurtled past myself and some friends while we were standing near the edge of a cliff looking at tombs. Cinghiale, or wild boar- terrifying and beautiful at the same time, they certainly left their mark on the earth!

Email ThisBlogThis!Share to TwitterShare to FacebookShare to Pinterest
Labels: Bone, Etruscans, How it all began

What do you think? I'd love to hear what's in your head.