Hello all, a Merry Christmas to you. I've blogged for work about some Christmas festivals in the past, if you fancy a read of that here for some classy blogging (ahem) about pagan Roman and Norse goddesses that got turned into witches and child-eating trolls (no, really) after the Christian takeover.

But what I really want to blog about is that one of the most irritating, senseless, sexist bullshit songs of the year has had a Christmas makeover... and is now almost utterly delightful.


Mulled Wines... by Greg James and Chris Smith, off of BBC Radio 1. If the link doesn't work (and I suspect it won't as it's being rubbish) click here to have a watch.

However, just so as you know, while the original song drove me nuts, one single lyric saved it for me- because it made it so funny I couldn't help gurgling like a happy toddler each time this overplayed piece of disgusting misogynistic nonsense came on the radio.

This redeeming line? "Try to domesticate ya, cos you're an animal, baby it's in your nature."

Okay, maybe this is one of the worst lines in the whole sorry business, as it reduces women to animals (huge rage, not ok, fury burning fury). UNTIL it made me think of Ian Hodder's Domus theory. The idea that Neolithic humans had to deliberately make a decision to make the wild world of animals and plants safe, domesticated and everyday. So everytime over the last year I've heard that piece of shit song, I have a terrifying mental picture of Hodder himself singing out to a recalcitrant aurochs and waving an improvised halter around... on top of a Catalhoyuk style house.

So yeah- that mental picture, and saving you from an impending hernia each time Blurred Lines gets played (even though it should have been put in a bin long ago), is my Christmas present to you.

In the meantime, #mulledwines. And Happy Christmas. See you in 2014.
Posted by Unknown at Tuesday, December 24, 2013 No comments:


I have just watched my beloved England lose the Ashes to Australia. I am very aware that it's only a game, it's 22 grown men chasing a little red ball and throwing it at some sticks, trying to hit it with a big stick. Yet I am pretty gutted right now, and I am sure lots of other archaeological cricket fans will be too.

There are lots of aspects of England's loss- and I think all of them have a message for those of us who work in other areas. As a New Year approaches, and the entire archaeological community of the UK heads off to TAG, I want to briefly think about why things go wrong, and what to take from England's loss and apply to archaeological practice.

Basically, I think four things contributed to the loss of the Ashes:

1) Over-training for the wrong things

I am convinced that England's downfall is at least partly due to an obsession that coaches, pundits and players have had with working on batting against spin. Tours in India, Dubai and Sri Lanka exposed a vulnerability- so quite rightly everyone worked hard to combat this. Only they forgot to work equally hard on pace and bounce- the bowling skills that have skuttled England down under. This happens in archaeology and academic life too- how many times have you spotted a flaw, then worked and worked on it, only to find that something you hadn't even noticed was more important? This happened to some extent in my Viva- I had been very worried about one aspect of the thesis in the days before, and had prepared hard for questions on that. Then when the examiners picked up on something else, I was surprised. When approaching a problem, and assessing your own performance, maybe it's important to look at the whole, and go for a balanced approach to training yourself to be a better archaeologist- one that focuses not just on what you're not great at, but at what you have been good at before. Don't let it slip, because it might just make the difference. Which brings me on to...

2) Complacency. A large amount of England's travails have been caused by a softly-softly victory last summer. The scoreline flattered England, and made them feel that the tour in Australia would be easier than it has been. No matter how much you bang on about taking every game as it comes, if you feel that you won easily, or did really well without trying, complacency has its foot firmly in the door. Then when things do go wrong, it's too late- you are smacked around the face (or on the helment by Mitchell Johnson at 90mph) with the reality that you aren't really up for this, because it's not as easy as you thought it would be. I've definitely done this- cruised along, thinking everything would be fine and my work was just great. It takes a kick up the arse to snap out of this, and I'm grateful to the various kickers over the years- and none of them have a terrifying moustache.

3) Exhaustion. Don't try and do too much. Even if you are feeling on top of the world. Back to back Ashes series, after a knackering winter in India last year (an incredible series win perhaps caused by that over-focus on spin I was banging on about earlier), was always going to be a tough ask. The complacency may have masked this for a while, but if you are physically and mentally tired, the cracks are going to start gaping open in your performance, whatever you do. You can't respond as promptly to pressure, you can't pull yourself out of a hole. Everyone needs rest- and I mean real rest, not fevered twitchy I-should-be-working rest. If you can't do this, you will end up with...

4) Injuries. A bad back (Alastair Cook). Calf and lower leg problems (Matt Prior). Burnout, seemingly endless colds and flu (archaeologists everywhere). You can't be good at what you do if you're sick as a dog or in constant pain. So don't try. Rest, recuperate, don't feel guilty, get better.

Four mistakes- England made them so that we don't have to. I hope- I will definitely do my best not to fall victim to any of these in 2014.

For now, I'm pretty happy that I managed to get cricket and archaeology mashed up on this blog- though I'm not sure you will be. 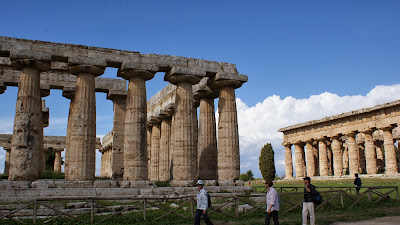 Like I said in my last post, I've been off and about the ancient world of late. Just over a month ago, I went to the Bay of Naples- somewhere I've wanted to go for a long time, but always been too lazy to get to at the beginning or end of an excavation season in Tuscany. Well, it was worth the wait. I got to go with a group of delightful work clients, and a lovely academic, Professor Emeritus Bill Manning from Cardiff (and his gorgeous wife, Maureen).

Before even going to Pompeii, I was in raptures over visiting Paestum- and seeing the paintings from the Tomb of the Diver for real. I could have spent most of my life in the little museum there- just gazing at these Etruscan-but-not-Etruscan things. The temples, too, were fabulous- with the great umbrella pines leering next to them, and the clear blue sky above. It was a great start to the week. Maybe too great- to be honest, the next day's visit to Pompeii was not how I'd expected. Paestum had been almost empty- there was a snake crawling along one of the ruins, it was that quiet.

By contrast, Pompeii was RAMMED. We snuck around the back, and entered via the amphitheatre. It was amazing, but full of floodwater and podgy but sad looking stray dogs. 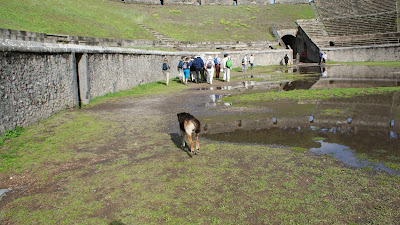 Then we wandered along some insulae- I don't think I was really taking it in at this point. I was so busy thinking about the present- the day ahead, hoping everyone would get lunch ok, hoping that the site would stay quiet. Then little things started to hit me. The bars. They were so familiar- a strip of boozers like those I used to wobble down as a student, playing stupid games of pub golf. I thought of them full of people, laughing and chatting, pushing and jostling. I couldn't get my head around what had happened to those people- until I saw the casts. Now, I'm not usually someone who is against the display of human remains. But to see the contorted body of a child reaching for its agonised mother, rendered in plaster, being snapped at by a thousand tourists, kind of upset me. There is so much power in these casts. Perhaps too much- the child and its mother didn't feel like people- they felt like a show. And, on reflection, that is so damn wrong. I felt more and more confused as the day went on- the buildings were amazing, but all I could think of was the contrast between the archaeological pleasure and the utter pain of Pompeii's original population. Then we went for lunch at the Autogrill- not quite garum on toast. 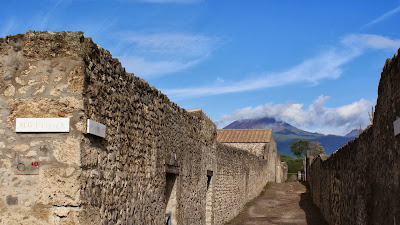 The day at Pompeii was great, if weird. And I took some lovely photos (if I say so myself). But it made me nervous about going to Herculaneum. If the preservation of Pompeii had freaked me out so much as to induce intense archaeological guilt, what would 2 storey buildings and boathouses full of skeletons do?


As it turns out, the complete opposite. I loved Herculaneum. It was pouring with rain- there were floods of water tumbling down the steep entrance to the site. I took the precaution of wearing flipflops, and my feet were soon soaked and spotted with little pieces of ash- something I've only just thought about. The buildings didn't have the same mournful air as Pompeii- that sense of a tourist resort in January, sad and bleak yet still busy- in spite of the huge overlay of ash that was so painfully obvious. While at Pompeii I felt like a voyeur, in other people's houses with a crowd of nosy busybodies, at Herculaneum I felt completely at ease. I'm not sure why- maybe the state of preservation and lack of crowds muffled the effect of the ghost town. Also, the victims of Herculaneum were safely roped off- dignified in their skeletal form, without the fleshy horror of their final torture.

I've been thinking about Pompeii and Herculaneum a lot this week- mostly due to the trouble relentlessly bubbling away in the archaeological organisation of the sites. These incredible places are the ultimate cursed blessing- from the preservation/destruction moment to the politics and pleasure of the present day. I don't know what the answer is, to my own feelings or the more serious issues facing Pompeii, Herculaneum and other sites in Italy in an uncertain financial and political climate. But I'm damned glad I went.


Have you been to Pompeii? What did it feel like for you? Am I just a soppy oversensitive loser? Get in touch please, do let me know.